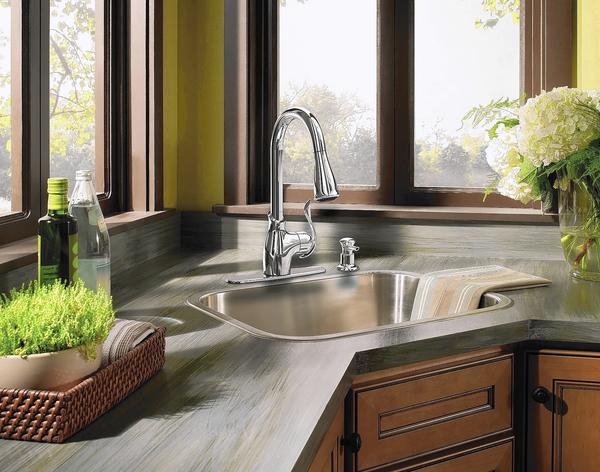 Stainless steel is often the best choice in sink materials if homeowners tend to be hard on sinks. (Moen photo / February 25, 2014)

A kitchen sink is a kitchen sink, right? From one sink to another, how much difference could there be?
Actually, quite a lot, according to Jake Smith , technical director for Rohl, a California sink manufacturer. Smith recently co-led a seminar for design professionals (with Rohl colleague Skip Johnson) on the wide world of sinks at the recent Kitchen & Bath Industry Show, a trade event in Las Vegas.
“There is no one perfect sink — each one has a different appeal, each one has a different client,” Smith told the kitchen designers.
Smith and Johnson walked the designers through the pros and cons of various materials that can go into the kitchen sink, which they described, with a smile, as a “water appliance.”
Here’s a primer on the four sink materials that Smith and Johnson said are the most commonly found in the marketplace.
•Cast iron (with an enamel surface): These sinks have been around since the 19th century, Smith said.
“They’re very sanitary, don’t hold bacteria well,” he said, adding that the material is acid- and stain-resistant, stable and durable, and comes in many colors. On the down side, the enamel can scratch and chip, and cast iron sinks tend not to hold hot temperatures well, meaning that the user might have to refill it while washing a load of dishes.
•Composites: Sometimes called “granite” sinks, these are a blend of acrylic polyester, granite and quartz, bound with a man-made resin, Smith said.
They’re lightweight and easy to install; retain water temperature well; sink colors are easy to coordinate with countertop materials, he said. Cons: They can be difficult to clean and may be prone to chipping, Smith said.
•Fireclay: It’s Smith’s favorite sink material, he said, because of its durability. Made from clay that’s fired at a high temperature, it resists scratching and denting and cleans easily, he said. It’s also recyclable, he said, adding “but it will last for generations.” The negatives on Smith’s list are short: The color range is more limited than with some other sink materials.
•Copper: “It has natural antibacterial properties, and is very customizable,” he explained. Look for sinks of 100 percent copper, as the 90 percent copper/10 per cent nickel mixtures that show up in the marketplace tend to be inferior, Smith said. Also, look for welded seams, not soldered ones.
Copper sinks demand care, Smith said: They have a low melting point, so it’s not advisable to place very hot pots in them; polishing usually can remove surface scratches. Copper sinks can dent.
This post originally appeared on ChicagoTribune.com on Feb. 26, 2014.