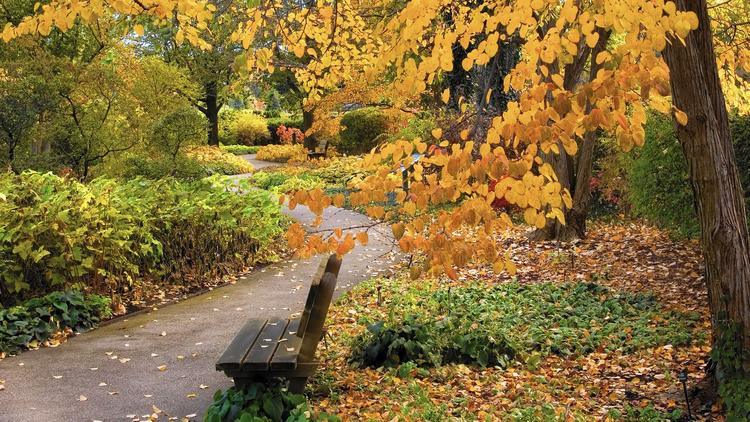 With its thousands of trees, The Morton Arboretum is naturally a hotbed of color in the autumn. Visitors typically walk or drive through to marvel at the changing colors, but Ed Hedborn, plant records manager at the arboretum, recommends riding a bicycle through the 9 miles of its paved trails.
Visitors can bring their own bikes year-round, and bike rentals are available during weekends in the fall.
“You can see more of the arboretum in a smaller amount of time,” Hedborn says, “and still have the advantage of being out in the open air.”
(The Chicago Botanic Garden in Glencoe also offers cyclists a 1-mile trail alongside its grounds between Green Bay Trail and North Branch Trail. Go tochicagobotanic.org/visit/biking for details.)
About this year’s fall color show: Hedborn says that it’s always difficult to predict when the foliage will be at its peak. Much depends on fluctuations of the weather patterns. Over the years, however, he has noticed that in early to mid-September, certain vines start changing color. Next, the gray dogwoods begin to turn purple, followed by other trees whose leaves change color.
Then the sugar maples change. “One year they can have yellow foliage, the next year it might be bright red, and the year after that a dull orange, depending on the weather,” Hedborn explains. “But sugar maples drop a leaf here and there, so they have an extended color range over a week to 10 days.”
Biking allowed at The Morton Arboretum 7 a.m.-sunset daily year-round; bike rental available, weather permitting, 10 a.m.-4 p.m. Saturdays-Sundays until Oct. 26.Rental fees start at $17 ($15 members) for three hours. 4100 Illinois Route 53, Lisle. Admission: $12; $11 seniors; $9 ages 2-17. 630-968-0074 or mortonarb.org.For fall color reports, check the website in early October or call its Bloom ‘n Color hot line, 630-719-7955.
This article originally appeared on ChicagoTribune.com on Sept. 18, 2014.