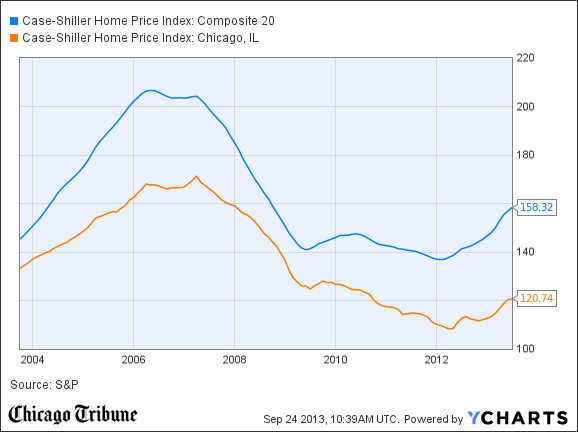 July home prices across the nation continued to beat their monthly and year-ago comparisons but the rate of increase slowed, according to a widely watched barometer of the housing market.
The Chicago area led the nation in monthly gains, posting a 3.2 percent increase in prices in July, according to the S&P/Case-Shiller home price index, released Tuesday.
Another piece of good news for the Chicago area came in a report on mortgage delinquencies and foreclosures, which showed those rates are at low not seen in more than three years.
The monthly local gain in July’s S&P/Case-Shiller home price index followed a 3.2 percent increase in June and a 3.6 percent gain in May. On an annualized basis, home prices in the Chicago area were up 7.8 percent in July, putting them in line with where the local home market was in late 2002, pre-market crash.
Condominium prices in the Chicago area rose 3.9 percent month-over-month in July and were up 14 percent from July 2012. That’s akin to where condo prices were in July 2002.
In the local market, the biggest price gains were in homes that sold for more than $308,120.
Nationallly, the home price index showed gains in the top 20 cities included in the monthly index for the fourth consecutive month. Home prices rose 1.8 percent in July and were up 12.4 percent year-over-year.
However, in 15 cities, the rate of improvement slowed in July, compared with June.
Cities in the Southwest continue to lead the nation’s housing market recovery, but all cities remain far below the pricing peaks they achieved before the housing bubble burst.
“Since April 2012, all 20 cities are up month to month,” said David Blitzer, chairman of S&P Dow Jones Indices’ index committee. “However, the monthly rates of price gains have declined. More cities are experiencing slow gains each month than the previous month, suggesting that the rate of increase may have peaked.”
For instance, in San Francisco, home prices were up almost 25 percent year-over-year but the 2.2 percent monthly gain in July compared with 2.7 percent in June. Miami’s 1.2 percent increase in prices was down from a 2.1 percent increase in June; prices in that city rose almost 14 percent year-over-year.
The index is based on a three-month rolling average of home prices so it reflects activity this spring, when homebuyers were rushing to take advantage of historically low mortgage interest  rates that were starting to push higher. Since early May, the average rate on a 30-year, fixed-rate mortgage has increased by 1 point.
That will send homebuyers back to the sidelines and will slow spending on other goods and services, according to Lindsey Piegza, chief economist at Sterne Agee.
Separately, CoreLogic reported Tuesday that while mortgage delinquences and foreclosures in the Chicago area far outpace those of the nation, they continued to trend down in July.
Among homes with a mortgage in the Chicago area, 8.4 percent were at least 90 days delinquent on their loan payments, putting them at risk of foreclosure and 4.09 percent of outstanding mortgages were in foreclosure. That compares with 10.57 percent and 6.16 percent, respectively, a year ago.
The local delinquency rate, which has dropped month-over-month for  18 months, has not been that low since August 2009 while the foreclosure rate was last at the level in January 2010.
This post was originally published in the Chicago Tribune on September 24, 2013.