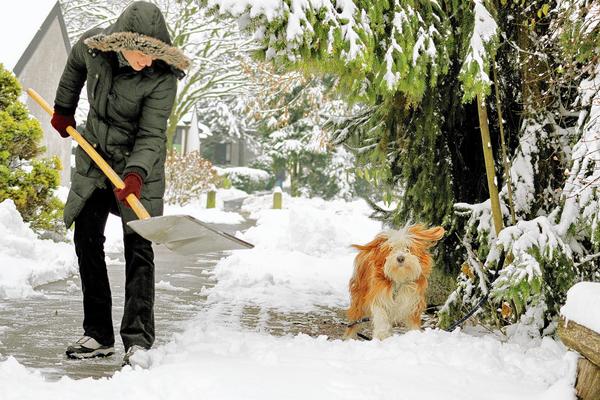 Piling snow onto some shrubs can cause branches to break from the weight, so be careful where you put the snow when shoveling. (Mladen Cvjeticanin, Vetta / February 24, 2014)

Q: Is the snow bad for my garden?
— Jessie Johnson, Glencoe
A: Overall, the snow cover is good for your garden. Think of the snow as mulch for your plants in addition to creating a beautiful winter scene.
A thick layer of snow will serve as an excellent insulator for your plants’ soil on days and nights when temperatures are very cold, as they have been many days this winter. Without snow, the ground can freeze more deeply.
Snow also can insulate against sudden thaws. Plants that were installed last year can heave out of the ground because of the freeze-thaw cycles that typically occur in late winter and early spring in this climate.
Some shrubs may be completely covered by a deep snowfall, and there is no need to dig them out. Let nature take its course in these situations.
But snow also can cause problems. The weight of heavy snow on upward-pointing branches of some shrubs such as arborvitae can split or break them and cause the plants to fall or be uprooted.
If you have vulnerable plants, it is best to carefully remove snow while it is falling and before there is a deep accumulation. Once snow has frozen on the plant, it will be best to let it melt away. Trying to chip it off can cause a lot of damage.
Piling snow onto some shrubs can cause branches to break from the weight, so be careful where you put the snow when shoveling. Try to avoid piling snow that contains salt from ice-melting products onto garden beds or shrubs.
If you have plants that already have been damaged by snow and ice, there is not much you can do now other than removing branches that are a safety hazard.
The snow will provide cover for animals such as voles that can tunnel through it and feed on grass and the bark of woody plants. The trails they make feeding on grass will become visible in the lawn after the snow melts.
Rabbits and deer also feed on trees and shrubs during the winter, so monitor for tracks and damaged bark. As the snow piles up, the rabbits will be able to reach higher into shrubs to feed and cause more damage. If you start seeing damage, protect the plants with netting.
Animal repellents can be applied when temperatures are above freezing long enough for them to dry on the plant.
This post originally appeared on ChicagoTribune.com on Feb. 28, 2014. Click here to view it.